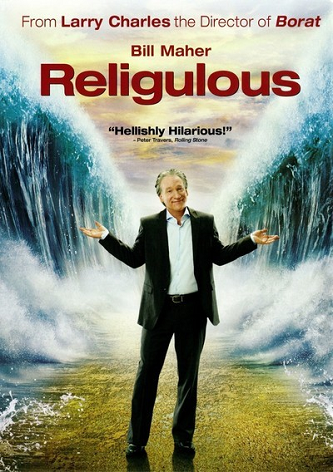 "The only appropriate attitude for man to have about the big questions is not the arrogant certitude that is the hallmark of religion, but doubt. Doubt is humble, and that's what man needs to be, considering that human history is just a litany of getting shit dead wrong."
— Bill Maher
Advertisement:

A documentary film by Bill Maher released in 2008.

In its premise, Bill goes through a journey across the U.S. and other parts of the world talking to people, while looking for the answer to this question: Why do people accept the fantastic stories and teachings that religions preach? As is evidenced by the title of the movie, though (a portmanteau of "religion" and "ridiculous"), Bill Maher already has some opinions on the matter that he'd like to pass on to the audience.