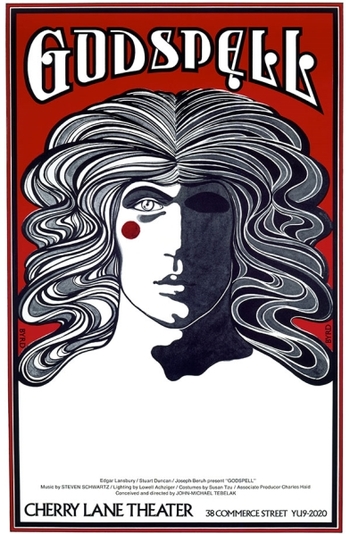 "Prepare ye, the way of the Lord."
Advertisement:

Godspell is a musical rendition of the Christian Gospel—primarily the book of Matthew but also some selections from Luke and one from John—with a contemporary soundtrack and aesthetic. It was created by John-Michael Tebelak, who wrote it as his master's thesis at Carnegie Mellon University, but after its (successful) debut, its producers hired an up-and-coming composer named Stephen Schwartz to rework the music. It was Schwartz' second break-out success (after Pippin, which he worked on alongside Bob Fosse), winning him two Grammys and paving the way for further successes, such as some of the DreamWorks cartoons, the movie Enchanted, and the musical Wicked.

The musical mostly uses lyrics from pre-existing Episcopal hymns, but with completely new melodies composed by Schwartz (plus one song from a fellow student of Tebelak and member of the original cast); it also showcases many of the more famous parables from the Gospels. The story is told in a light-hearted, almost vaudevillean style; indeed, in the original stage production and The Film of the Play, the characters dressed up as clowns, symbolizing their conversion. From a production standpoint, it can be run with a very small cast (four or five instrumentalists and ten actors), and the stage directions are quite vague: each production is advised to come up with their own settings, costumes and contexts for the show, and ad-libbing and audience participation are encouraged. Long story short: this is an easy production for theatres of any size, quality and shape to take and make their own (which is part of why it's been financially successful). Finally, it isn't particularly preachy, which helps keep it accessible to all audiences.

It was released the year after the other 70s-rock-musical-about-Jesus Jesus Christ Superstar, and definitely benefited from the resultant hype; furthermore, it lacked the Darker and Edgier quality that put a lot of Christians off the Andrew Lloyd Webber offering (if anything, Godspell is Lighter and Softer than the way the Bible is preached in many churches!). One of its songs, "Day by Day," was released as a single and achieved some success that way; it's toured about a gazillion times; there are a number of cast recordings out; and there was a movie in 1973.