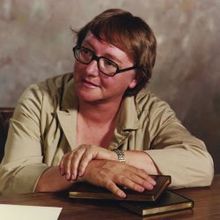 Science fiction encourages us to explore... all the futures, good and bad, that the human mind can envision.
"...[O]f my parents, he [Walter Breen] was by far the kinder one.  After all, he was only a serial rapist.  My mother was an icy, violent monster whose voice twisted up my stomach."
—Moira Greyland
Advertisement:

Marion Eleanor Zimmer Bradley (June 3, 1930 – September 25, 1999) was a prolific Speculative Fiction and Fantasy writer who was often regarded as having a feminist bent to her work. MZB, as she was known to fans, was a co-founder and the namer of the Society for Creative Anachronism.

She was most famous for her Darkover series and the novel The Mists of Avalon. She was a contributor to the Thieves' World setting, with a sequence of stories featuring Lythande, Mage of the Blue Star. She also dove into gay and lesbian Pulp Fiction early in her career.

Over a decade after her death, detailed allegations

of sexual abuse regarding her own children

and those of others, and her marriage to serial child molester Walter Breen

, for whom she may have procured victims, have irreparably tainted her work.

Works by Marion Zimmer Bradley with their own trope pages include:

Other works by Marion Zimmer Bradley provide examples of: