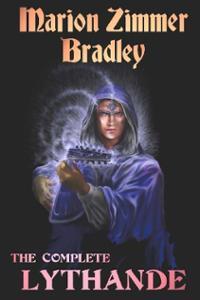 Lythande is a character created by Marion Zimmer Bradley, and conveniently enough also the name of the anthology of stories written about the character. There are also several other stories that were not published in the original anthology which were not collected for 25 years, until The Complete Lythande was published in 2013; most are available in other anthologies, and some as separate ebooks. The character was originally created for, and the first story ("The Secret of the Blue Star") written for, the first Thieves' World anthology.

The stories are usually at best tangentially related; some stand completely alone and some reference previous stories, but only a few are directly related (through recurring characters). The general setup is Lythande entering a new place and either being hired to deal with a magical menace or falling afoul of a magical effect. The conflicts are usually resolved by a combination of wits, willpower, force, and magic.

Due to a Late-Arrival Spoiler in the original story which forms the basis of several others, all story folders will have unmarked spoilers.

Tropes applying to Lythande or the stories in general:

Spoilers about Lythande in general

open/close all folders
The Malice of the Demon
A vain queen demands Lythande summon a demon for her.
The Secret of the Blue Star
Pilgrim Adepts are bound by many vows, the most important of which is the secret that is the key to their power; should any man learn their secret, they will lose their power and be worth nothing but death. An old enemy has come into town and is trying to discover Lythande's.
The Incompetent Magician
Lythande is hired to retrieve a magician's stolen magic wand.
The Wandering Lute
Lythande comes to a minor heir to a kingdom who has suddenly inherited the throne, who is unfortunately bound on his route as a Wandering Minstrel by an enchanted lute that keeps him moving. Lythande trades instruments with him so that he can go back and ends up at the mercy of the wandering lute.
Somebody Else's Magic
A dying priestess bequeaths her magic sword to Lythande, and Lythande has to pass as a woman to return it to where it belongs.
Sea Wrack
A siren has been terrorizing a fishing village, and Lythande agrees to get rid of it. It turns out to be a hard decision to go through with.
Looking for Satan
This story was written for Thieves' World by Vonda N. McIntyre; Lythande is a borrowed character. Its canonicity isn't certain; MZB consulted to make sure it fit the character and it was included in the original collection, but it is not in the 2013 The Complete Lythande.
The Virgin and the Volcano
This story is a crossover with the character Eirthe, created by Elizabeth Waters.

To undo a curse, Lythande accompanies Eirthe through a barrier around a volcano, only for it to demand a virgin sacrifice. The only virgin around is Lythande.

North to Northwander
The Gratitude of Kings
This story is a crossover with the character Eirthe, created by Elizabeth Waters.

Lythande comes to the kingdom of Tashgan (the heir from "The Wandering Lute") for his wedding ten years later.

The Children of Cats
This story is a crossover with the character Eirthe, created by Elizabeth Waters.

Lythande crosses path with the child of Rastafyre the Incompe-... Incomparable (from "The Incompetent Magician"), who shows she inherited his talents.

The Walker Behind
When being stalked by a supernatural entity, Lythande takes shelter in a wayside inn, and seems to have gone from the frying pan into the fire.
The Wuzzles
Lythande comes into a village and is tasked with getting rid of "wuzzles". Whatever those are.
The Footsteps of Retribution
Chalice of Tears
To Kill The Undead
Lythande must find a way to rid a town of a vampire, but since vampires are already dead, it seems impossible.
To Drive the Cold Winter Away
Lythande comes to a town in which all sorts of happiness and fun have been outlawed.
Fool's Fire
Here There Be Dragons
Lythande goes up a set of magical stairs into a strange world.
Goblin Market
Bitch
Lythande and another Pilgrim Adept are turned into dogs by an angry ghost.