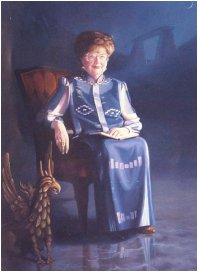 Dont be tricked by the name! She's been a lady all along.
Advertisement:

Andre Alice Norton (born Alice Mary Norton, February 17, 1912 – March 17, 2005) was a prolific Speculative Fiction writer. She was dubbed "Grande Dame of Science Fiction and Fantasy" by her biographers, fans, and peers, and has an award comparable to a Nebula for young adult speculative fiction named after her. She was also the first woman (and sixth person) to be named Grand Master by the Science Fiction Writers of America. She published her first novel in 1934 when she was 21 and her last posthumously in 2006.

Norton is well-known for her "soft" Science Fiction, Science Fantasy, and Fantasy novels, although she also wrote such things as spy stories, Westerns, and gothic romance. Her most famous works are probably the Witch World series and her Beast Master novels, the latter of which were later adapted (sort of) to film and a tv series. Her work greatly influenced many modern authors, including Mercedes Lackey and David Weber. A number of female authors were encouraged to write on finding out that Andre was a pen name, and she was a woman.

. (Even The Other Wiki had to split the bibliography into a page of its own.)