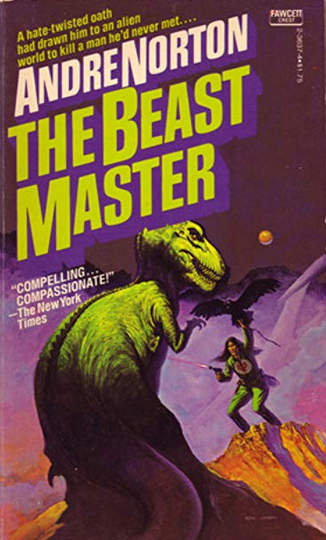 The Beast Master (1959) is a science fiction novel by Andre Norton.
Advertisement:

The Beast Master is Hosteen Storm, a commando soldier with telepathic/empathic links to a team of genetically-enhanced animal companions: the meerkats Hing and Ho, the African Black Eagle Baku and the sand cat Surra. Following a war between humanity and the alien Xik, which humanity wins but only after the Xik wipe out all life on Earth, he attempts to make a new life for himself on one of Earth's colony worlds, where he gets involved in a Space Western adventure and another conflict with the Xik.

The fantasy film series The Beastmaster was inspired by Andre Norton's novel, but makes so many changes that she declined to be credited. It in turn inspired the TV series BeastMaster.