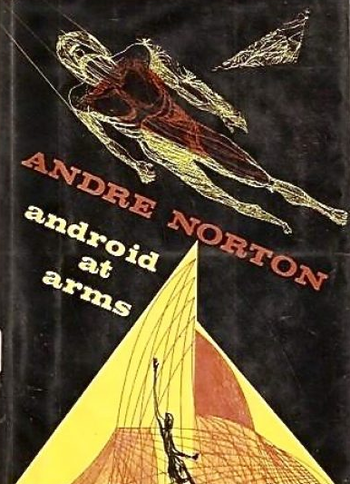 Science-fiction adventure by Andre Norton. Andas Kastor regains self-awareness on a barren prison planet where he has been incarcerated by unknown entities for unknown reasons. A power failure frees him and several companions. When they compare notes, they discover that they were all involved in critical time-sensitive situations - in different years. They also discover that the prison planet includes highly advanced technology which appears to be for creating android duplicates of beings of various races, and speculate that they may have been kidnapped in order to be duplicated and replaced.
Advertisement:

The ill-assorted comrades find a ship with navigation tapes for various planets, including Andas' home world of Inyanga. After a series of planet-hopping adventures, including some double-crosses and a few losses, Andas and his companions make it, only to find that the current ruler is... Andas Kastor, decades older and with three daughters. And then things really start to get wild....

Tropes associated with Android at Arms: