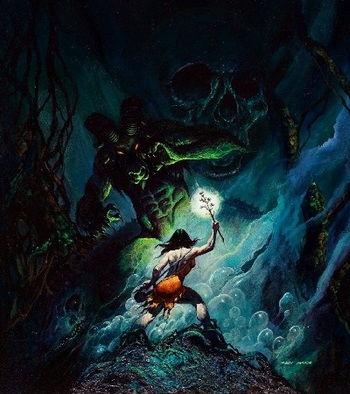 Dread Companion is a SF/Fantasy novel by Andre Norton.
Advertisement:

Rather than be shoved into a slot by bureaucracy, Kilda takes a job taking care of two children. One, Bartare, is a Creepy Child, with a companion that her brother Oomart calls "She" and the "Green Lady" and fears. They, with the children's mother, arrive on a planet to find that the children's father has died, and Kilda takes over for the children while the mother collapses.

When they go on a sight-seeing trip, Bartare lures her brother off and insists on doing something with stones. Kilda, following, is trapped with them in another world, where to eat its food is to be transformed into one of its beings..