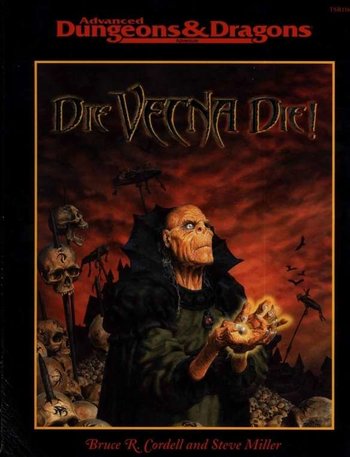 The Whispered One himself
Advertisement:

Vecna Trilogy refers to three adventure modules for 2nd Edition of Dungeons & Dragons, loosely connected by their central antagonist, the eponymous Vecna, whose schemes threaten the worlds of Greyhawk, Ravenloft and Planescape.

The name Vecna is nearly as old as D&D itself. At first, it would appear merely as a mention in Eldritch Wizardry, one of the supplementary books for the original edition of the game, a name of a powerful lich who has perished but left behind him two powerful artifacts. The Hand and Eye of Vecna could grant the user immense power, as long as they were willing to sacrifice their corresponding body parts.

With the dawn of the Second Edition of Dungeons & Dragons, the story has been expanded. In the world of Greyhawk the name Vecna is shrouded in legend and whispered in fear. Vecna was a lich who created his own evil empire and sought not only to conquer the whole world but to ascend to godhood. He was, however, betrayed and destroyed by his right-hand, the vampire Kas. His artifacts were all that was left of him and without them, he cannot return to the material world. Vecna could be an evil influence, trying to corrupt wearers of his artifacts, but had not made an appearance in any of the official D&D supplements.

That changed in 1990 with the publication of a high-level adventure Vecna Lives! by David "Zeb" Cook. In it the party was desperately trying to first stop Vecna's, who had been elevated to a demigod status, return and, failing that, to find a way to defeat him. The adventure's intended ending is Vecna being banished from Greyhawk to an unknown world.

In 1998 a sequel, written by Monte Cook (no relation), has been published under the title Vecna Reborn!. In it turns out Vecna has been trapped in Ravenloft, becoming a Darklord with his own domain. Or rather half of it, the other half being ruled by Kas, the two's punishment being to always be at war with one another but never able to gain an upper hand as neither can cross to the other's half. But Vecna schemes still and the party has to prevent him from escaping.

In 2000 Wizards of the Coast, having acquired rights to Dungeons & Dragons, has published the final adventure for its 2nd edition, written by Bruce R. Cordell and Steve Miller - Die Vecna Die!. An adventure spanning worlds of Greyhawk, Ravenloft and Planescape in which Vecna's ambitions threaten the entire Multiverse. His new plan is not to just escape Ravenloft but to achieve the power of a greater god, take over Sigil and reshape the whole existence in his image.