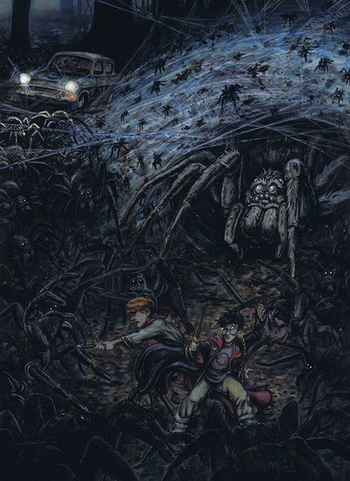 "Harry, when you said we were going into the Spider-Verse, I thought you meant the movies!"
In Real Life, spiders tend to be rather lonely creatures. A lot of species have females eating their males after breeding, and, in many cases, the mother herself ends up eaten by her own children once they hatch.
Advertisement:

In fiction, though, things tend to be different. Occasionally, especially in a Science Fiction or Fantasy setting, a work will depict a species of (often but not necessarly) Giant Spiders that attack in large number, or even live in colony, the same way ants, termites and bees do. They will often have a "Spider Queen", which they protect and which will be often much bigger than they are. And they will have eggs, a lot of eggs, that can hatch anytime, unleashing entire swarms of small spiders on you.

The reason for this trope is quite obvious. Spiders Are Scary, so an entire colony of spiders will be even scarier, much more so than one of giant ants or termites. There is also the fact a spider nest can easily be imagined as filling the role of a hive for bees.

A very common trope in Video Games, where spiders are typically featured as small but numerous enemies who obey to a bigger one.

Notice that the trope, while it can be a case of Artistic License – Biology or Critical Research Failure, can also be, to an extent, justified if the species of spiders involved is fictional. Also, as noted in the Real Life section of this page, this trope actually is, to some extent, Truth in Television: there are species of spiders that are social, just not to the extent presented in fiction.

A subtrope to Giant Spider and The Swarm. Can arguably be related to Horde of Alien Locusts.

A swarm of spiderlike Scuttlebugs comes out as Mario gets close to their web. Good thing for Invincibility Stars.

A swarm of spiderlike Scuttlebugs comes out as Mario gets close to their web. Good thing for Invincibility Stars.