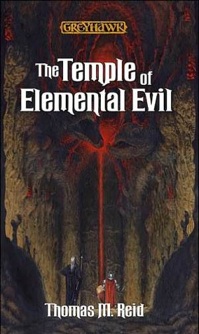 A sinister force, long thought destroyed, stirs from the black hole that spawned it. Like an ebony darkness it prowls the land and safety is but an illusion, for it watches from every shadow and ponders possibilities.
Advertisement:

A classic Dungeons & Dragons Tabletop RPG adventure module that was also adapted into a video game by Troika.

The Backstory tells of the Temple of Doom dedicated to the Demon Queen of Fungi, Zuggtmoy (don't laugh, she's one mean hidden Final Boss!). The forces of good sealed and hid her inside her temple with the help of five powerful wizards. For many years the temple was quiet and the nearby village of Hommlet was prosperous, but there are signs of life in the temple yet...

The temple was divided into roughly five sections, one for each classical element and a fifth lowest for herself and her followers. A firm believer in Social Darwinism, Zuggtmoy had the head priest of each upper level go through a near constant Enemy Civil War to find out who was the strongest.

The Temple of Elemental Evil is part of the Greyhawk setting. Gygax's later "supermodule" Queen of the Spiders is considered largely his sequel to The Temple of Elemental Evil, to the point TSR has re-balanced another linked module series, Scourge Of The Slave Lords, to seamlessly fit in between the two. The three have been referred together as "the Greyhawk Sequence" among the fans.

In 2001, Wizards of the Coast published a novelization of the module, written by Thomas M. Reid, who also contributed to R.A. Salvatore's War of the Spider Queen novel series.

In 2002, a 3rd Edition revisit, fittingly titled Return to the Temple of Elemental Evil put a new temple inside of an extinct volcano, 25 years after the fall of the first temple, in in-game time. The new Temple was actually an Evil Plan by Tharizdun, god of Entropy, to escape his prison. This game in turn was remade as a fan module for Neverwinter Nights 2.

A partial conversion of the original module for the 4th Edition rules, covering the first leg of the adventure in Hommlet, was distributed by Wizards of the Coast to RPGA members in 2009; of the rest, there has yet been no sign.

The plot concept was revisited for Fifth Edition in 2015 as the Princes of the Apocalypse adventure, which is essentially "what would happen if the Cult of Elemental Evil appeared in the Forgotten Realms". That said, it did include an appendix titled "Adapting to Other Worlds", which included information for converting the adventure contents to Dark Sun, Dragonlance, Eberron, player-created worlds, and of course, Greyhawk. The same year saw the release of an Adventure Board Game based on the module

The 1985 tabletop version (pen, paper, and dice) has many of the tropes on the Tabletop RPG and Dungeons & Dragons pages. The video game has its own set of Video Game Tropes, see The Temple of Elemental Evil.