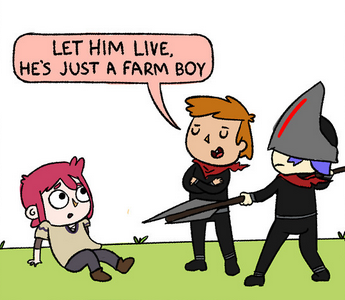 "I'll tell him that the substitute Shinigami he was worried about...turned out to be a piece of trash that wasn't even worth killing."
— Ulquiorra Cifer, Bleach
Advertisement:

You find yourself at the mercy of someone much more powerful than you. Whether you're too weak to keep fighting, hopelessly outclassed, or just plain out of luck, you know there's nothing you can do to stop them. And then... they do nothing. They leave you to your fate, whatever that may be, and go about their business like you were nothing but a bump in the road. What happened?

They decided that you're "Not Worth Killing."

If a villain decides someone's not worth killing, it's usually either The Hero and their party or the averagely-skilled friends of the highly-skilled hero who survive their Final Boss Preview with the Big Bad or The Dragon because the bad guy couldn't be bothered finishing them off. Whether or not this makes any sense as an excuse to keep the secondary heroes alive varies. Sometimes it's an excuse from a Worthy Opponent or Noble Demon to not engage in wanton slaughter. Sometimes the villain is trying to maintain a respectable image and doesn't want to risk getting his hands dirty. Sometimes the villain doesn't kill because it wouldn't advance their goal. Sometimes the heroes fit into an Evil Plan of the villain that requires their survival (for the moment). Sometimes the villain figures that the would-be victim is actually a net liability to the heroes or a potential convert to the villain's cause. Some consider the would-be victim so pathetic or repulsive that being in their presence, even to kill them, disgusts them. In some cases, the villain just doesn't consider the victim any kind of threat that can interfere with their plans. Either way, expect this to backfire as the heroes eventually return and defeat the villain for real, raising the question of why the villain did not just kill them.

The most literal examples of the trope refuse to kill their targets for the same reason a normal person doesn't hunt down and stomp on every cockroach they see; it's just not worth the time and effort unless they're making a nuisance of themselves. This usually applies to characters arrogant enough to believe that the opponents aren't a real threat, or powerful enough to know that they aren't a threat. Savvy characters should note that those who invoke this trope can and will change their stance if the target causes enough trouble for them later.

Also sometimes used by the Anti-Hero as an excuse for not wiping out the Mooks. It can be parodied with words to the effect that, "I'd kill you, but the paperwork would kill me."

May be related to Doesn't Like Guns. Compare Cruel Mercy, If I Wanted You Dead..., You Will Be Spared, and Villain's Dying Grace.