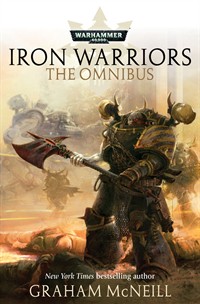 Iron Within, Iron Without
From Iron cometh Strength. From Strength cometh Will. From Will cometh Faith. From Faith cometh Honor. From Honor cometh Iron. This is the Unbreakable Litany, and may it be forever so.
Advertisement:

One of the nine Traitor Legions of Chaos Space Marines from Warhammer 40,000.

They are the Villain Protagonists of Graham McNeill's series of Iron Warriors novels, and also feature heavily in the Ultramarines novels Dead Sky, Black Sun and The Chapter's Due. McNeill's novels follow the fortunes of the Chapter after the Horus Heresy, focusing on Warsmith Honsou and the Iron Warriors assault on the Imperial world of Hydra Cordatus.

Novels And Short Stories In The Series

Please resist the urge to put examples on this page or link to this page on tropes unless you are citing from 40K novels in which the Iron Warriors feature. Examples which are specific to rulebooks and other in-universe fluff should go on either the 40K page or in the Chaos Marines section of the Warhammer 40,000: Forces of Chaos page.

Tropes connected to the Iron Warriors