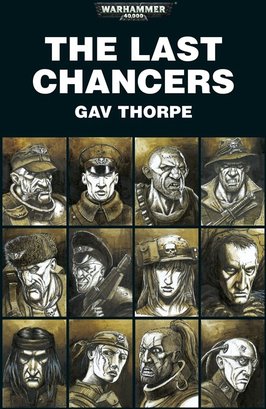 The Last Chancers is a trilogy of novels set in the Warhammer 40,000 universe written by Gav Thorpe. The novels in the series are named 13th Legion, Kill Team, and Annihilation Squad, and concern the titular 13th Penal Legion of the Imperial Guard, informally known as the Last Chancers. Led by Colonel Schaeffer, the Last Chancers are drawn from convicts in Imperial service, other penal legions, and anyone else with a criminal history with skills that might be made useful. Schaeffer leads them on a quest to redeem themselves in the eyes of the God-Emperor, either by making a difference in the Imperium's perpetual conflicts or by dying in His service, whether the convicts seek redemption or not...

The novels are told from the point of view of Lieutenant Kage, a convicted ex-guardsman with a determination to survive his time in the legion, a short temper, and a disregard for almost all other life. He and the rest of the Ragtag Bunch of Misfits that are the Last Chancers are put through every kind of battlefield hell Schaeffer can drag them through, both to redeem them, and to find the strongest, toughest, and most useful soldiers ever to be convicted before an Imperial tribunal.

Tropes seen in The Last Chancers include