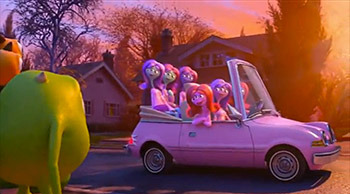 "We're having so much fun and you're not! Loser!"
Hop in my Chrysler; it's as big as a whale
And it's about to set sail!
I got me a car, it seats about 20
So come on, and bring your jukebox money!
— The B-52s, "Love Shack"
Advertisement:

A specific instance in a work where there is a large group of people inside a vehicle, especially a convertible. The people inside will sometimes stop to speak with or heckle another character.

This occurs frequently in shows or movies that take place in High School settings or Teen Dramas, but can occur in any work and to a character of any age.

The car in question is nearly always a convertible. It will be inexplicably filled far past capacity, with teens sitting up on the rear deck and drop top, too. The passengers are usually young, very attractive, and far more popular than the victim.

If a character is being heckled, the people in the car will typically consist of a mix of mean girls, and/or jerk jocks.

They'll come as messengers to either remind the protagonist of how much of a loser he is, or tell them they are going to a really cool party, which the protagonist was not invited to, and they'll will likely get soaked as the car drives off. Even more fun is if the people in the car moon others or throw things at them.

The main purpose for using this trope is to point out just how low the victimized character is on the social ladder. Either they are incredibly unpopular, or too poor to afford a car, let alone a swanky convertible. The character is left to contemplate his own loneliness as the car drives off. This is especially apparent if the passengers are friendly with the protagonist, and ask them to join them despite lack of room in the car. The victimized character is also often young and easily embarrassed.

Alternately, this trope can focus on the horrible behavior of the people in the car. If the movie is about the passengers and not the victim, it certainly exposes those characters' true natures.