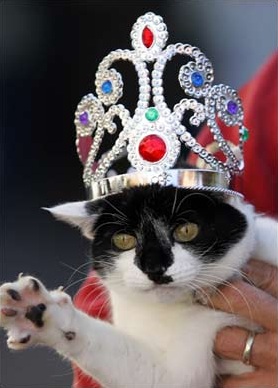 Cats are the elves of the animal kingdom. They're better than us — and they know it.

Cats are almost always portrayed as particularly intelligent, cunning, and independent, and in works with any degree of anthropomorphization a cat is likely to be The Chessmaster, a Deadpan Snarker (see also Cool Cat and Cats Are Snarkers), or other Sub-Tropes of The Trickster. Sometimes they are all but stated to be a Superior Species.

On the other hand, cats' perceived negative qualities — such as aloofness, arrogance, smugness, and laziness — might be attributed to their awareness of their exalted position.

This can, but need not, overlap with Cats Are Mean. Superior cats can have a wide range of attitudes toward lesser creatures: showing contempt for them, ignoring them, treating them with amused tolerance, or taking pains to guide and protect them. There's also an overlap between this and Cats Are Lazy, with cats thinking that they should be pampered.

This trope is approached from another direction through the traditional association between cats and magic. Whether Magic Is Evil or benign, it is yet another way for cats to show intelligence and wield power. Is it any wonder that witches have long been associated with them?

This trope is often subverted when dog characters are the main characters of the story or are more major to the story than cat characters.