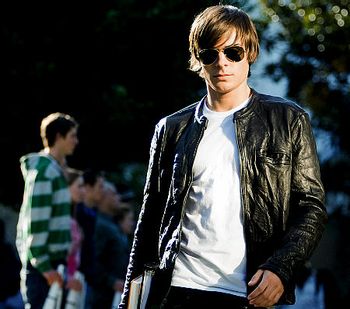 The Big Man on Campus is the most popular guy in the High School. He is handsome, charming, a superb athlete and usually pretty smart and an A student. Most importantly, he is a subversion of Popular Is Evil. Unlike his peers the Alpha Bitch (who is usually his girlfriend until he realizes how awful she is) and the Jerk Jock (usually his friend until he realizes how awful he is) the Big Man on Campus never bullies anyone: he rules through charisma and general awesomeness rather than fear and manipulation. But like the Lovable Jock (with whom he is often close, if not one and the same), woe to anyone who trifles with him. He'll probably grow up to become The Ace.

The Big Man on Campus is very popular in Prep school fiction, as a well-read, handsome, athletic, affable, and articulate man is the epitome of prep.

The High-School Hustler is occasionally a Big Man, but more often lower on the totem pole.

Generally this character is either the protagonist himself, or is the chief love interest in a story about a Cool Loser heroine. He rarely turns up if the story is about male outcasts (as the existence of a benign popular kid makes it harder to use jocks as villains) or about a popular girl (as those sort of stories usually give her an outsider love interest).

The Big Man on Campus is Always Male. For a "popular but good-hearted" High School female equivalent, Class Princess is the trope of choice. For his Evil Counterpart, see Big Jerk on Campus. Compare School Idol and Lovable Jock. For settings outside of High School, compare Magnetic Hero.