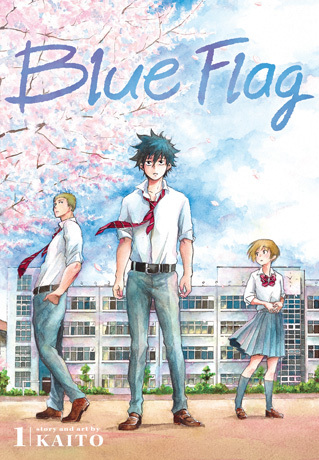 "A lover? A best friend? Which would you choose?"
"Best friends... lovers... at this time, I still... don't know how it ends."
Up until his second year of high school, Taichi Ichinose has only had to deal with the usual stressors: exams, cliques, expectations. Now he has to add right hand man to this list when the perpetually clumsy and shy Futaba Kuze asks him for help wooing Toma Mita, their school's resident popular kid.
Advertisement:

Futaba has harbored a crush on Toma for some time, and she's now finally ready to take the first step to becoming his girlfriend. Problem is she doesn't know where to even begin: Toma's good looks, outgoing personality, and athletic prowess attract plenty of attention from girls, but Toma has never taken a girlfriend. As such, she doesn't know what Toma's preferences are. Since Taichi and Toma are friends, Taichi is in the perfect position to know what Toma likes. And, fortunately for Futaba, Toma told Taichi exactly what those traits are. Despite not really liking Futaba, Taichi accepts her request.

What the both of them don't know is that their efforts are doomed to fail before they can even begin. Toma is already in love with Taichi; the description he gave Taichi about what he likes in a girl was just a smoke screen. The only one who can see through the smoke is the aloof Masumi Itachi, who is also in love with her own best friend, Futaba.

As the school year unfolds, misunderstandings abound, secrets are uncovered, and the relationships between these four teens will be tested. Only one thing's for sure: by the time they're holding their diplomas, nothing will be the same again.

Blue Flag (青のフラッグ, Ao no Furaggu) is a shonen romance manga by KAITO. It was serialized in Shonen Jump+ from February 2017 to April 2020, ending with a total of eight volumes. VIZ Media released the series in English.