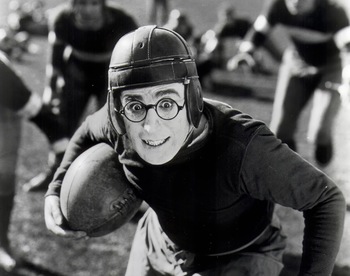 The Freshman is a 1925 silent comedy film directed by Fred C. Newmeyer and Sam Taylor. It is one of the best-remembered films of its star, Harold Lloyd.

Lloyd is Harold Lamb, a naive young man who leaves for Tate College with a determination to be popular. On the train to college he meets, and falls for, pretty Peggy (Jobyna Ralston). Harold works hard to become popular at Tate, asking people to call him "Speedy", doing a little dance when introducing himself to strangers, giving a rousing speech to the student body, buying everyone on campus ice cream, and trying out for the school football team. Unfortunately, all of these efforts backfire spectacularly, and he becomes—unbeknownst to him—the laughingstock of campus. Only Peggy (who turns out to be his landlady's daughter) genuinely likes him.

Harold makes the football team—as a water boy and tackling dummy, while believing he is actually on the squad. At the Fall Frolic dance Harold is cruelly stripped of his illusions, learning that he is looked upon as a fool and the butt of jokes. After a heart-to-heart with Peggy, Harold is determined to prove everyone wrong by being a hero at Tate's big football game.

This film might well be the Ur-Example for Big Game, Big Man on Campus, Dean Bitterman, and Put Me In, Coach!. Inducted into the National Film Registry with the class of 1990.

Not to be confused with the 1990 movie starring Marlon Brando and Matthew Broderick, nor with Pixelberry's Visual Novel The Freshman, from the app Choices: Stories we Play.