Held Back in School 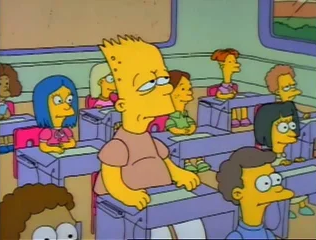 Those that don't learn history are doomed to repeat the class.
"Don't act like you're smarter than me! I've been in high school for SEVEN YEARS! Ain't nobody smarter at school stuff than Misuzu!"
— Misuzu, River City Girls
Advertisement:

Students in a school setting generally advance up in Years or Grades as they age up and each new year they expand upon the knowledge they should already know. However, sometimes the student in question is forced to remain in their current year while all their peers advance to the next stage. Maybe they're too cool for school and they don't work hard. Possibly, they may have been more than mentally capable but have had to repeat due to health issues. Or maybe the sad truth is that it really was the best they could do; but they just can't memorize all 50 states of the USA. Either way, they get forced to repeat the year/grade with people younger than themselves. This is Truth in Television in some countries.

In media, it's highly likely that the character who is held back is to be The Bully, thus giving them a physical edge on their classmates. Conversely, girls are rarely held back, enforcing the idea that girls perform better at school.

In extreme cases, the character may be held back for 10 — sometimes even 20, or more — years. This is usually played for comedy, as the jarring image of a 20- 30- something adult sitting with little kids to learn the alphabets often make a hilarious scene.

Due to there being a stigma surrounding it, characters who are held back are Acceptable Targets - expect this to be used as proof that the character is an idiot, and not just Book Dumb either, and very frequently an Insufferable Imbecile. Characters who are held back are rarely portrayed sympathetically - and when they are, they often keep this as a hidden shame. This is especially the case in the United States where "No Child Left Behind" laws make it much harder to fail.

Not to be confused with Back to School, which is about adults returning to school. Or with Dawson Casting, which is where everybody just looks like they've been held back.