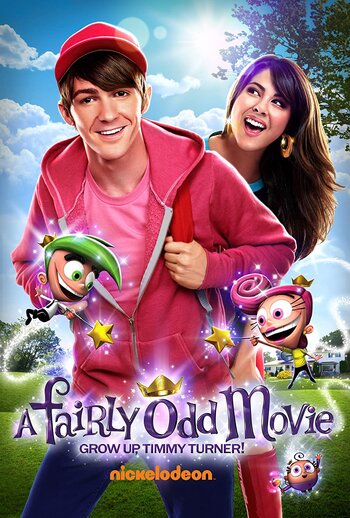 A Fairly Odd Movie: Grow Up, Timmy Turner! is a Made-for-TV Movie that is the second Film Adaptation (Live-Action) of one of Nickelodeon's cartoons - in this case, The Fairly OddParents.
Advertisement:

The film is set thirteen years following the events depicted in the original series, but nothing has changed for Timmy (played here by Drake Bell) except for his physical age now being 23. He still lives at home with his parents, attends Mr. Crocker's fifth grade class, and rides a tiny children's bicycle to school. Timmy's arrested development stems from his desire to keep his fairy godfamily, Cosmo, Wanda, and Poof, for as long as possible. "Da Rules" state that every child must eventually give up his or her Fairy Godparents when they become an adult, but Timmy has found a loophole around this rule by acting like a child.

But Timmy's carefree life takes an unexpected change when he comes across his former Stalker with a Crush, Tootie (Daniella Monet), who has grown up to become a brave, beautiful nature-loving woman. While seeing Tootie protesting the plans of an evil oil tycoon named Hugh J. Magnate Jr. (Steven Weber) to tear down the old Dimmsdale Park, Timmy finds himself developing romantic feelings for her, and he has to decide whether he should keep being a child to keep the fairy family he has known for so long, or grow up and be with the woman he loves. As if that isn't enough, Magnate joins forces with Mr. Crocker (David Lewis) to capture Cosmo, Wanda, and Poof, planning to use them to fuel his maniacal ambition.

The film first aired July 9, 2011. A sequel titled A Fairly Odd Christmas came out in December 2012. The movie featured Drake Bell and Daniella Monet reprising their roles as Timmy and Tootie. Following this is A Fairly Odd Summer released in 2014.

This TV movie includes examples of: