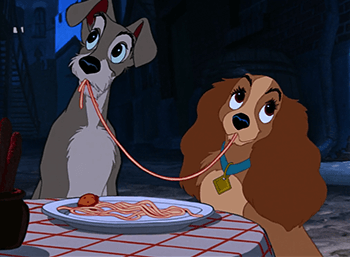 You can probably guess how this is going to end.
"If they share a strand of that spaghetti, I'm so gonna hurl."
— Danny Phantom
Advertisement:

A parody of a scene from Disney's animated film Lady and the Tramp, where the titular characters shared a plate of spaghetti. The two canine lovers, distracted by a romantic serenade, ended up chewing opposite ends of the same noodle and accidentally nibbled their way into a kiss. Sometimes a parody of the next beat (Tramp nudging the last meatball over to Lady with his nose) is also included.

The contact of mouths caused by chewing the same food item is what makes this trope, so the edible item can be almost anything. Hotdogs, waffles, noodles, as well as other types of long pasta like fettuccine and linguine will do, as long as two lovers can nibble on the same item from opposite ends. Works originating from Japan usually invoke the trope by using Pocky sticks, a special kind of stick biscuit dipped in either chocolate or strawberry flavor, and of course, Japanese noodles (ramen, soba and such).

See also Sweetheart Sipping, if it is a drink that is shared by the lovers.

A cute reference to the infamous scene, provided by Clover and Alex.

A cute reference to the infamous scene, provided by Clover and Alex.