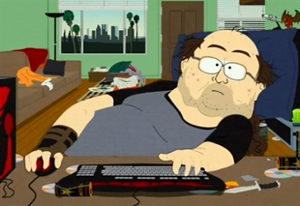 Doesn't always have to live in a basement.
"...And then you've got the ones who are just waiting for their parents to die. My one friend is like, 'This'll all be mine one day,' and I'm like, 'What are you talking about? Your mother is only 54. What are you gonna do, poison her?'"
— Chris Rock
Advertisement:

A stereotypical Nerd who, despite being a grown adult, still behaves like an adolescent, right down to living with his parents. While the decor of his Poster-Gallery Bedroom is subject to the tastes of the character, be sure there will be a computer to communicate with the outside world. It's always Played for Laughs. More importantly, the subject is Always Male. There is much less stigma against a female character living at home - in the past, women were expected to stay with their parents until they married, men were expected to go out and earn money so they could be breadwinners while being shamed and/or shunned if they didn't do so, and these ideas still endure in many cultures today. This makes the trope a Double Standard against men (but see below).

The guys who are depicted in this condition usually fit into one of the following:

Note that this trope only seems to apply when the character is introduced as an adult living with his parents. On most dom coms, characters who were children when the show premiered often continue to live at home after reaching adulthood, sometimes even moving into the basement to have more personal space. This is because the alternative would be either creating a whole new set for their new home/college dorm and splitting the plot between the parents' and the adult child's activities, or making them into a Drop-In Character who only occasionally appears, which can hurt ratings if the kid is a popular character. An accepted compromise is to just invent a reason why they're still living with their parents, especially since by this point, the sitcom could be in its last few seasons.

In a Four-Temperament Ensemble, he tends to be either choleric if confident, bully others around and treat others like servants or phlegmatic if simply too unmotivated, indifferent, shy or depressed.

Note that living with one's parents is a stigma mainly in the USA and other Anglosphere countries, where working-age adults are expected to live on their own, so this trope shouldn't be applied to characters from cultures where this is the norm. This trope has become much less stigmatizing in Real Life, however, as problems and deficits in the economy have been sending more and more adults back to their parents' homes, and some in the newer generation don't even leave in the first place. And if this article is any indication, this trope could even become discredited at some point in the future.

In fact, it may already be that "near future".

Also, with the COVID-19 pandemic, it's been here to stay for at least two years.

For a more serious treatment of this as a social problem, see Hikikomori. Not to be confused with Madwoman in the Attic. Compare The Hermit and The Thing That Would Not Leave. See also Loser Protagonist.