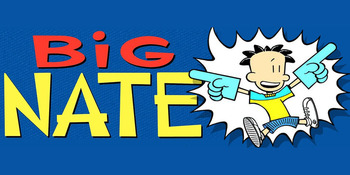 One thing you need to know: Nate's the star.
"Our homework is, we have to write a hundred words in this journal every day. A hundred words!"
(Nate draws a muscular version of himself in his notebook)
"Fortunately, one picture is worth a thousand of those suckers..."
— Nate, from the very first strip in January 7 1991
Advertisement:

Big Nate is a comic created by Lincoln Peirce. The main character is Nate Wright, a 4'6" sixth-grade underachiever who lives with his clueless dad and older sister. He's said that the things he hates most are cats, egg salad, and figure skating—and he seems to be afraid of the former two. Conversely, Nate loves dogs, Cheez Doodles, and hockey, as well as Femme Fatality comic books, playing chess, and drawing his own comics (sometimes starring himself). Nate is convinced that he's "destined for greatness" despite his fairly average skills and his low grades. He believes that he's a Kid-anova despite not being liked by many girls at all, especially his crush Jenny.

His friends and teachers at his school, P. S. 38, have the biggest focus, with Nate's very smart best friend Francis, and his other best friend Teddy. Nate's social studies teacher, Mrs. Godfrey, is thought of by Nate as a Sadist Teacher. Other kids at his school include Drama Queen Dee Dee, all-around Nice Guy Artur, Nate's crush Jenny (who, in turn, hates him), and Insufferable Genius student Gina. The strip gained fame through the Big Nate Island on Poptropica and produced a series of (very popular) chapter books and collections. The strip debuted in 1991 and is still running. The comic can be found here

. Reading from the beginning is not required but recommended.

It is also the basis of a Poptropica world, and has inspired tons of chapter novels and comic collections that began releasing as early as 1992 with more planned for future releases.

A special book, Epic Big Nate, was published for the 25-year anniversary of the strip. A collection of books, The Complete Big Nate, contain one year each of the strip.

In 2020, it was announced that a Big Nate animated series was in production at Nickelodeon.