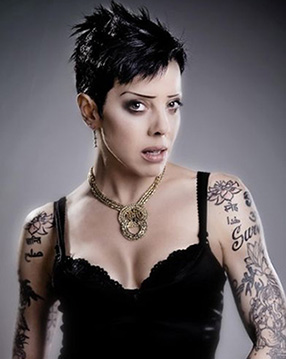 Bif Naked (born Beth Torbert; June 15, 1971) is a Juno Award-winning, Indian-born American-Canadian rock singer, writer, poet, motivational speaker and actress. She has sold many platinum albums. Born in New Delhi to teenaged parents, Bif was subsequently adopted by American missionaries and lived in the United States before settling down in Winnipeg.

She is heavily tattooed, getting her first tattoo, an Egyptian Eye of Horus, when she was 16. Her tattoos include a symbol of the Tao, Japanese writing, Buddhist poetry and images (such as the Bodhisattva) and Hindu imagery. She has stated on MTV that her favorite tattoo, on her left arm, reads "Survivor."

Bif has always been frank about her bisexuality, and the lyrics of her autobiographical songs (such as 1995's "Everything") detail her attractions to and relationships with women. She is also a strict raw-food vegan for health (as opposed to ethical or religious) reasons. She identifies as straight edge.

In January 2008, she announced that she had been diagnosed with breast cancer, and underwent a lumpectomy and chemotherapy. Bif Naked blogs on her Web site about politics, her personal life, and dealing with cancer.

Before her solo career, Torbert played with punk bands Gorilla Gorilla and Chrome Dog. She has toured Europe, the United States and Canada as a headlining act, and has performed on bills with Snoop Dogg, Billy Idol, Dido, Sarah McLachlan, Sheryl Crow, Chrissie Hynde, the Foo Fighters, the Cult and many more. She recorded a version of "I Saw Mommy Kissing Santa Claus" for the MTV: TRL Christmas CD. She was also featured on the Ready to Rumble soundtrack with a cover of Twisted Sister's "We're Not Gonna Take It", the Celebrity Deathmatch soundtrack with "Vampire", and Buffy the Vampire Slayer's soundtrack with "Lucky". The song "Lucky" was also featured in the 13th episode of the only season of Moonlight (2007), an episode titled "Fated to Pretend" and in the 16th episode of the second season of Charmed, titled "Murphy's Luck". The song "Dawn" off Purge was featured in the movie American Psycho 2: All American Girl, starring Mila Kunis and William Shatner. In 2006, she made a guest appearance in the song "Fucker" on Strapping Young Lad's album The New Black.

Bif Naked has also made guest appearances with artists such as SNFU on the songs "One Last Loveshove" and "You Make Me Thick". She also appeared on the Dead Celebrity Status album Blood Music on the track titled "In This Day and Age".

Solo albums include Bif Naked, a self-titled album; Purge, and I Bificus. In 2005, after narrowing it down from over 50 songs, she released Superbeautifulmonster with 13 tracks. The Promise was released in 2009 and was dedicated to her fans. Sick, Bluejay and You'll Never Know were mixed by Juno Award winner Mike Fraser. Bif recorded the album during her chemotherapy treatment for breast cancer. Bif is currently working on writing a book and has an acoustic side project album on the way.

She has appeared in music videos for The Offspring's "The Kids Aren't Alright", Moist's "Believe Me" and "Silver", Liveonrelease's "Get with it" and Simple Plan's "Save You" near the end along with other people (such as Sharon Osborne and René Angélil) who have been treated for cancer. In 2011, she recorded a duet with Will Blunderfield, a Vancouver yogi and Nettwerk recording artist, for the international version of his album Hallelujah.