Literature / A Confederacy of Dunces 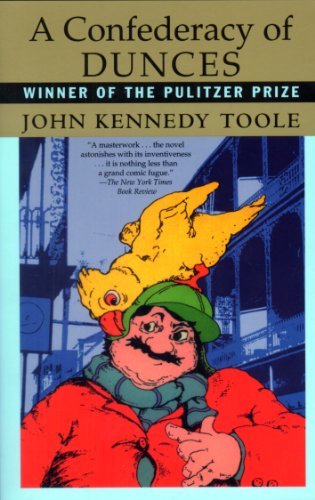 This page needs proper geometry and theology!
When a true genius appears in the world, you may know him by this sign, that the dunces are all in confederacy against him.
— Jonathan Swift, used as the epigraph and source of the title
Advertisement:

Published in 1980, 11 years after the suicide of author John Kennedy Toole, A Confederacy of Dunces is often hailed as one of the funniest novels ever written.

Set in New Orleans in the mid-1960s, the plot follows the misadventures and disasters of Ignatius J. Reilly, an overeducated, offensive, and puritanical (not to mention grotesquely fat) slob as he is sent out by his mother to find work to pay for damages caused by a car crash. In his quest, Reilly provides the catalyst for a range of subplots involving hot-dog vendors, university protests, factory owners, pornographers, and sociopathic lesbians as he wages war on modern culture across the city. His ghastly personal habits and completely marginal ability to notice the existence of other people stun the gentle reader.