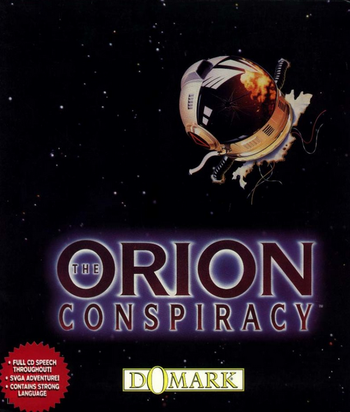 The Orion Conspiracy is the title of a graphic adventure computer game that was released in 1995. The game was published by Domark and developed by Divide By Zero. The Entertainment Software Ratings Board gave the game a "Teen" rating, while the ELSPA gave it a "18+" rating for its profanity, violence and reference to homosexuality. The game was released on DOS and later the Windows operating system.
Advertisement:

In the year 2160, the universe is run by corrupt corporations and governments that will do anything in order to get what they want. On a space station, Devlin McCormack has just buried his estranged son, only to receive news afterwards that he was murdered. Devlin seeks to unravel the conspiracy behind his son's murder.