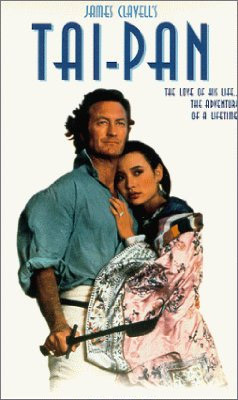 The stereotypical relationship of a white male with a disadvantaged, or submissive, Asian woman.

Interracial relationships, in general, are still a touchy subject. There still exists the notion that the women of a social category somehow "belong" to the men of that category and vice-versa. Those who stray are often considered some kind of traitor to "their people". Asiatic-European pairings are also plagued by the shadow of Orientalism

, and a long history of stories about "pink men rescuing brown women from evil brown men". Though Orientalism was originally defined by European attitudes to the Middle East, European eyes went on to view the Far East through the same paradigm. In any case, the modern stereotype of an Asian woman is that she's a charmingly exotic, uber-domestic, unquestioningly-subservient nymphomaniac... or, at the other extreme, an uneducated, ditzy moron. Thus, her white lover will arrive and be somehow "better" than her Asian peers, often to the point of her complete devotion.

Sometimes, this trope is a simple Race Fetish, but at other times, expect one or both partners to be something of a Flat Character. The Asian woman may exhibit Asian Speekee Engrish, may be a sex worker, may be an immigrant struggling to fit in, or otherwise show some sort of social disadvantage. The white male, however, will either be a a wealthy, successful, exotic and handsome hunk-angel who will win the hearts of frustrated Asian women or an Everyman that audiences can identify with. The former is popular in Glurgey Asian romance novels and is a direct counterpart to the eponymous Greek/Spanish millionaires of trashy romance novel fame.

In Real Life, it should be noted that white male-Asian female is the second-most common interracial pairing in the United States

. Back in The Golden Age of Hollywood, Chinese-American star Anna May Wong was treated this way in the press for dating white men - as she found that Asian men looked down on her for being an actress. But we won't get into the psychology or implications of real people here.

Compare Where da White Women At?, which is about African-male-European-female pairings, and contrast Black Gal on White Guy Drama, for the African-female-European-male pairing.

Contrast Like Goes with Like, where an Asian courts another Asian (though predominantly as it occurs in European media).