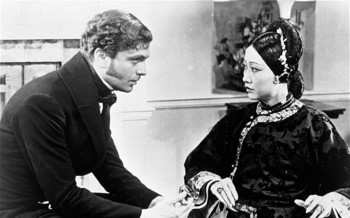 Java Head is a 1934 British black-and-white drama film. It is an adaptation of a little known novel by Josef Hergesheimer, and a remake of a silent film from 1923 (which is now considered lost).

Java Head refers to the house belonging to the Ammidons - a wealthy Bristol family of merchants. They are at odds with the Dunsack family - due to a long standing feud between the respective grandfathers. This proves problematic, as Gerrit Ammidon seems to have an attraction to Nettie Vollar, the family's granddaughter. After being warned off by Nettie's grandfather, Gerrit departs for a year long voyage. When he returns, he's married a Chinese noblewoman called Taou Yuen.

The film is notable for featuring the only time Anna May Wong was allowed to kiss her white co-star on screen.