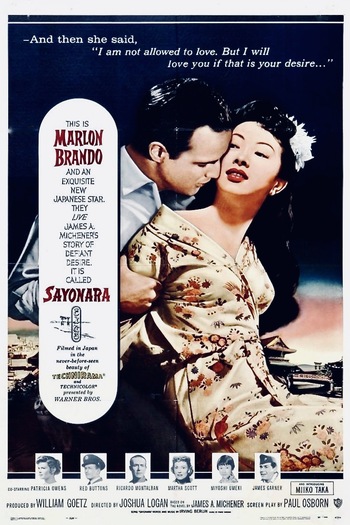 A 1957 drama film directed by Joshua Logan and starring Marlon Brando, Sayonara is the second most quintessential Mighty Whitey and Mellow Yellow film, after The World of Suzie Wong. It was adapted by screenwriter Paul Osborn from James Michener's 1954 novel of the same name.

The film takes place in 1951 during The Korean War. Major Lloyd "Ace" Gruver (Brando), a U.S. Air Force fighter pilot stationed in Korea whose father is a four-star general and who is prejudiced against Asians, is irritated that many of his friends and associates are marrying Asian women (something that the Air Force, and the U.S. military as a whole, strongly disapproves of). Gruver is transferred to a desk job in Kobe, Japan under the command of his father's friend, Lt. General Webster (Kent Smith). He is also engaged to marry Webster's daughter, Eileen (Patricia Owens), but he doesn't seem to be particularly attracted to her. After reluctantly serving as best man at the wedding of his crew chief Joe Kelly (Red Buttons) to local woman Katsumi (Miyoshi Umeki), Gruver finds his prejudices challenged when he meets and falls in love with the beautiful Takarazuka actress and dancer Hana-ogi (Miiko Taka)...

Has absolutely nothing to do with 2015's contemplative film Sayonara by Kouji Fukada, set in a post-apocalyptic Japan.