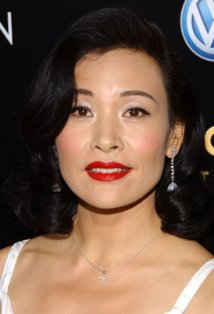 Joan Chen (born April 26, 1961 in Shanghai, China) is a Chinese-born actress, director, writer, and producer who has gained stardom on both sides of the Pacific.

She was born in Shanghai as Chen Chong, and grew up during the Cultural Revolution. When she was in high school, Jiang Qing (the wife of Mao Zedong) saw her excel in target shooting. This led to the young Chen Chong being inducted into the Young Actors' Training Program of the Shanghai Film Studio. She graduated school at 17, and began acting while studying English in university. In 1979, she starred in Little Flower, and the fame she received from this role led to Time calling her "the Elizabeth Taylor of China."

In 1980, Chen moved to the USA, and studied film. Her first Hollywood role was in Tai Pan. She also acted in The Last Emperor and Heaven And Earth, and played Dragon Lady Jocelyn Packard in the David Lynch series Twin Peaks. But she grew tired of playing the "exotic Asian lady," and began directing both Chinese and American films, such as Xiu Xiu The Sent Down Girl and Autumn In New York.

Chen returned to acting in the 2000s, starring in Jasmine Women alongside Zhang Ziyi. Other roles since her return to acting have been in Saving Face, Tonight At Noon, The Home Song Stories, Lust, Caution, Journey to the West, and Fringe. She also curated the first Singapore Sun Film Festival.

Chen lives in both Shanghai and San Francisco with her husband Peter Hui and their two daughters, and is now an American citizen. She is not related to Chang Chen.