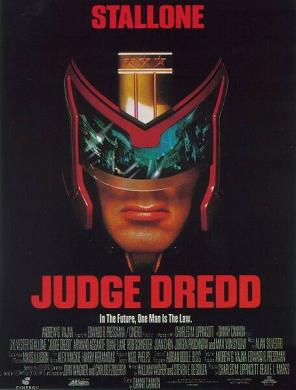 Court's adjourned.
Dredd: You killed innocent people!
Rico: A means to an end!
Dredd: You started a massacre!
Rico: I caused a revolution!
Dredd: YOU BETRAYED THE LAW!
Rico: LAAAAAWWWWWWW!
Advertisement:

Judge Dredd is a 1995 film adaptation of the comic book of the same name directed by Danny Cannon and starring Sylvester Stallone, Armand Assante and Diane Lane.

Following ecological and social breakdown in the 31st Century, those who survived flocked to the Mega-Cities, large urban landscapes covering hundreds of square miles. The Mega-Cities become overcrowded, giving way to wide-scale, uncontrollable crime and violence. Law and Justice, as we know them, become something of the past. To combat the rampant criminal activity, a new kind of police force is created, one with the power to dispense both justice and punishment, acting as Judge, Jury, and Executioner. They are The Judges.

The most dangerous of the Mega-Cities is Mega-City One, and to combat those dangers is the toughest of the Judges. His name is Judge Joseph Dredd.

Convicted of a crime he didn't commit, Dredd is out to bring justice to the situation which has befallen him as he uncovers the nasty conspiracy surrounding the perfect criminal, Rico.

The film combines characters and major plot points from about five completely separate story arcs in the comics along with other minor elements from the comic's history and tries to blend it all together in a single 96-minute narrative.

For the 2012 film adaptation, see Dredd.

Rico tries to deliver one of these to Dredd, but gets hit with one right back.

Rico tries to deliver one of these to Dredd, but gets hit with one right back.