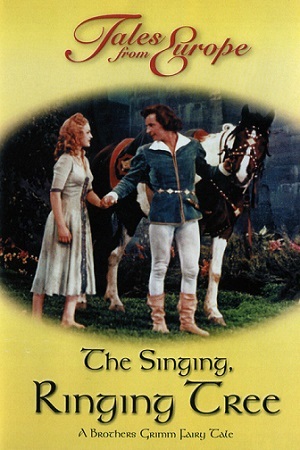 The Singing Ringing Tree (German: Das singende, klingende Bäumchen) was a children's film made by East German studio DEFA in 1957 and shown in the form of a television series by the BBC. It was a story in the style of The Brothers Grimm, directed by Francesco Stefani.

The film was purchased by The BBC and cut into three parts to create a mini-series which was first broadcast 19 November 1964 to 3 December 1964 as part of Tales from Europe, with an English-language voice-over track (not dubbed, however, the original soundtrack was simply faded up and down). It was repeated many times through to 1980.

One reviewer (Roger Thomas at amazon.com) has summed it up thus:

"Imagine a Fairy Tale conceived by Wagner and directed by Fritz Lang, with nods in the direction of The Cabinet of Dr. Caligari and German Expressionism, and you'd be close."

the Glorious Technicolour opening, to give you a flavor of what it's like.