Jerkass Has a Point 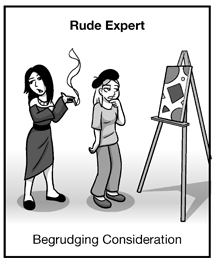 Reinhard: I've never once liked Oberstein as a person. But when I think back, it seems I've followed his advice the most. It's because that man's arguments are so right that they leave no room for debate.
Hildegard: A slate in the eternal tundra on which only the right arguments are etched. Everyone acknowledges the rightness of it, but refuses to go near it...That's who Fleet Admiral Oberstein is.
— Legend of Galactic Heroes
Advertisement:

They're not good. They're not nice. They're a jerkass. What they just said is probably the last thing you wanted to hear. But the worst part is that they're right.

The jerkass in question can be anything from your standard Jerkass (including its Sub-Tropes, Jerk with a Heart of Gold and Jerk with a Heart of Jerk) or Anti-Hero all the way up to any flavor of villain (though the chance is inversely proportional to the distance they go down the "slippery slope"). Whoever this jerkass is, they're seriously deficient in the morals department, at least from the point of view of the perspective characters. Then they have a moment where they say something undeniably true — the good guys don't have to like what they're saying, but they can't deny that they're right without deluding themselves. Cases typically involve the listener conceding the point or a trustworthy source agreeing with the jerkass. Perhaps even the protagonist is caught on a moral stumbling block, and the antagonist is all too glad to point out their hypocrisy. After all, at least the antagonist is honest about it. Or maybe it's the antagonist who is a hypocrite and sees the moral failings of the others but not his own. It is all too often that the character is Right for the Wrong Reasons, making some legit points, albeit for entirely selfish reasons.

The other main reason a character is likely to say something like, "I can't believe I'm saying this, but I agree with them."

It's worth noting the Alpha Bitch (or Bastard) and the Jerk Jock, two of the main distributors of this trope, have a tendency toward bluntness. While our hero's friends may be hesitant to insult them, these characters don't really care what they think and are willing to say exactly what they're doing wrong, without sugarcoating their "What the Hell, Hero?".

A rare outcome of the claim that "We are not so different". A response of "Shut Up, Hannibal!" would be out of place and is likely to get shot down if it appears but a Kirk Summation could work. See also Not Himself/Not Herself (a situation likely to inspire this), What the Hell, Hero? (same), and Don't Shoot the Message (when this occurs in Real Life). Also a likely response to an Insufferable Genius. Compare The Horseshoe Effect, wherein two people claim to be ideologically opposed and yet have beliefs in common. Sister Trope to Dumbass Has a Point, The Extremist Was Right, Hypocrite Has a Point, Villain Has a Point, Wisdom from the Gutter, and The Dissenter Is Always Right.

This is an In-Universe Only Trope. For it to be Jerkass Has a Point, the work or characters within the work must acknowledge that the jerkass is right. If a character who is often unpleasant makes a point that readers are meant to see as wrong, but still comes across as more sensible than the counterargument, that's Strawman Has a Point. Also, No Real Life Examples, Please!

After learning that Bart is on the airport's 'No Fly' list, Homer declares that he's driving Bart to a disciplinary camp personally, but as Bart points out, this means missing out on the trip to Vegas with his bar friends. Homer's frustrated yell is so loud that the gang could hear it from halfway across town.

After learning that Bart is on the airport's 'No Fly' list, Homer declares that he's driving Bart to a disciplinary camp personally, but as Bart points out, this means missing out on the trip to Vegas with his bar friends. Homer's frustrated yell is so loud that the gang could hear it from halfway across town.