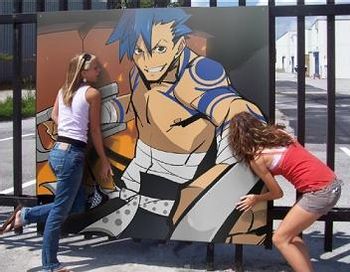 "I don't care if he's a billboard. He's still hot!"
Lister: This is crazy. Why are we talking about going to bed with Wilma Flintstone?
Cat: You're right. We're nuts. This is an insane conversation.
Lister: She'll never leave Fred and we know it.
— Red Dwarf, "Backwards"
Advertisement:

Perverse Sexual Lust is a term for a real person's attraction to a fictional character.

It originated in a reader poll during the early days of the Webcomic It's Walky!. The author wished to know the reason behind the slightly loopy church-girl character Joyce Brown's popularity, and saw this option achieve an overwhelming win.

It's somewhat justifiable in live action, especially if the character is played by a hot person, although it does raise the question of what is actually being fancied. Is a viewer fancying CSI: NY's Lindsay Monroe because of Anna Belknap, the character herself, or a combination of the two?.

It gets into the seriously weird when you're dealing with animated characters, although putting purely fictional characters into ahem situations has less creepy spillover to any real life people. Of course, many animated characters are intended to be attractive to the viewer, in which case it could be argued that this is the response the character designers intended in the first place.

As with many things, Japan has a specific term for Perverse Sexual Lust: "Nijigen no fechi" (二次元のフェチ)—literally, "two-dimensional fetish". More than a few otaku suffer from this syndrome, developing crushes on popular anime, manga, and even video game characters, in some cases to the point where they prefer the objects of their crushes to "real" people. In fact, according to these

, some fans even go so far as to attempt to marry the objects of their desire. The related terms "waifu" and "husbando", which became subject to Memetic Mutation, are broader in scope and can also apply to real people.

When a fictional character lusts after a Real Life person, then it may be a Celeb Crush. If a creator falls in love with their own character, who then comes to life, see Pygmalion Plot. Author Appeal sometimes involves the real-life creator being attracted to their own fictional characters.