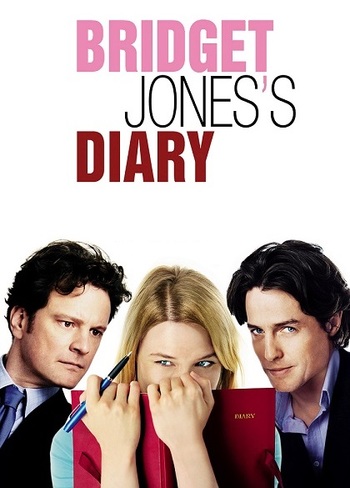 Bridget Jones's Diary began as a newspaper column in The Independent in 1995, and ran on-and-off until 2006. Its earlier years were eventually collected / rewritten into two novels, one self-titled and the other subtitled The Edge of Reason. Both were eventually made into films starring Renée Zellweger in the title role. They focus primarily on Bridget's existence as a single, unwed thirty-something who is somewhat prone to exaggeration. She perceives herself as an overweight, over-aged, dependent on self-help books, alcohol and cigarettes, and generally hopeless, the type who must fight "fears of dying alone and being found three weeks later half-eaten by an Alsatian." Nonetheless, she attempts to persevere as a self-assured, satisfied "Singleton" despite being increasingly surrounded by "Smug Marrieds" who seem to have turned This Loser Is You into an artform.

Naturally, this is all Played for Laughs, but the character's unexpected popularity made it clear that a lot of people could relate.

Both novels are based loosely on Jane Austen works: the first on Pride and Prejudice, and the second on Persuasion. The former's influence is very direct, with Bridget as Elizabeth, publisher Daniel Cleaver as Wickham and barrister Mark Darcy as, get this, Mr. Darcy. Mark is particularly influenced by Colin Firth's portrayal of the role in the BBC's '95 film adaptation, particularly his Sexy Soaked Shirt scene which Bridget, Shazzer and Jude frequently replay on tape. This created all-new levels of fangirl-swooning when Firth agreed to reprise(?) his role as Darcy for the Bridget Jones films. (It also created all-new levels of Celebrity Paradox for the second book, in which Bridget, the character, conducts a newspaper interview with Colin Firth, the actor.) Meanwhile, an actor friend of Fielding's, Hugh Grant, was cast as Cleaver.

, subtitled Mad About the Boy, was published in October 2013. A third film, Bridget Jones's Baby, was released in 2016, with Patrick Dempsey co-starring.