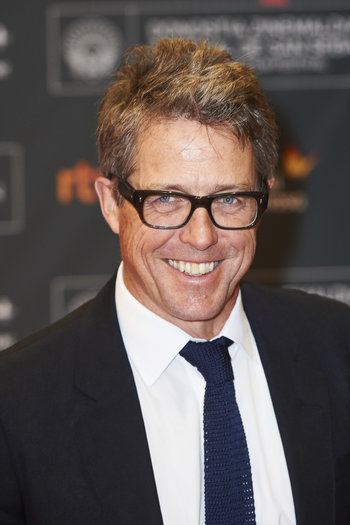 "Most actors really love it, that's what they want to do. They burn to do it. And so they'll read a script and think, that's an interesting part. And because they love acting, that blinds them to the fact that the rest of it is pretentious nonsense, which it very often is."
Advertisement:

He is best known for his long association with writer Richard Curtis in a string of wildly successful British Rom Coms, including Four Weddings and a Funeral, Notting Hill, and Love Actually. His standard role in these films was as a bumbling but well-meaning quintessentially British Upper-Class Twit, who had to overcome his British Stuffiness and repression to win the heart of a (usually American) female love interest. In the late 1990s, he began taking roles that had him actively Playing Against Type, often as a jaded English cad, such as Daniel Cleaver (an Expy of Pride and Prejudice's George Wickham) in Bridget Jones' Diary, and About a Boy, while occasionally blending the two types together (such as in Music and Lyrics). In another big instance of Playing Against Type, he played (among other characters) a slave-trading reverend, a Jerkass and vindictive husband who sends his brother in a retirement home against his will, and the chief of a Cannibal Tribe in Cloud Atlas. He also did Did You Hear About the Morgans?.

Recently, Grant's acting career has gone on the back burner due to his involvement in the campaign for tighter restrictions on the British media (including giving evidence for the Leveson Inquiry

). This, however, hasn't prevented him from appearing in a few recent films, such as the polarizing 2012 film Cloud Atlas, Alexander Waverley in the film remake of The Man from U.N.C.L.E. (2015) (which was not exactly well received), as well as in the 2014 rom-com The Rewrite (which while not being groundbreaking, speaks well for his performance). Better-received both financially and critically would be his turn as the well-meaning St Clair Bayfield in Florence Foster Jenkins (in a critically-appreciated combo performance with Meryl Streep, which they've clearly mutually enjoyed), as well as his memorable turn as Large Ham Phoenix Buchanan in Paddington 2 and critically-acclaimed portrayal of Jeremy Thorpe in A Very English Scandal.