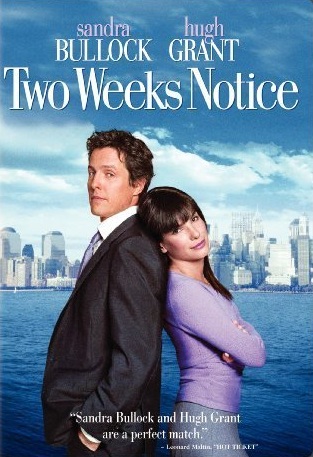 Philandering Millionaire Playboy George Wade (Hugh Grant) is the front man for a construction company. He hires Granola Girl lawyer Lucy Kelson (Sandra Bullock), who hates everything George stands for but agrees because it will save her hometown community center. Over the course of a year of working together he begins to rely on her more and more, until he cannot make a single decision without her input.

She realizes she's more of a nanny than a legal employee, and gives her titular resignation. But she can’t leave until she helps him hire a replacement. During this process Lucy meets June (Alicia Witt), the woman who’ll fill her shoes, and has second thoughts about leaving George.