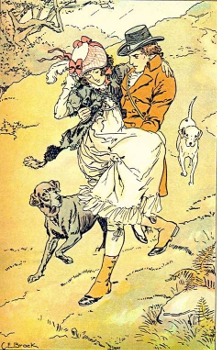 Written by Jane Austen and published in 1811, Sense and Sensibility is one of her best-known novels, not least because of the 1995 Ang Lee film. It tells the story of two sisters, Elinor and Marianne Dashwood, who, on the death of their father, are forced to move (along with their mother and younger sister) into rather more straitened circumstances. The novel follows Elinor's quiet, restrained love affair with Edward Ferrars (her sister-in-law's brother who is expected to marry a rich woman) and Marianne's more overtly-romantic love triangle with the dashing Willoughby and the older, reliable Colonel Brandon.
Advertisement:

The main theme of the novel is the contrast between reasonable Elinor's patience and sense of responsibility and Marianne's headstrong love of romance ("sensibility" in the language of the time), which often leads her into trouble.

The 1995 film cast Emma Thompson as Elinor and Kate Winslet as Marianne; a 2008 BBC Mini Series drew heavy inspiration from the film and is comparable in quality. The BBC also previously adapted the book into television miniseries in 1971 and 1981. There is also a Tamil-language Indian film based on the book and 1995 film, starring Aishwarya Rai and available in the US under the title I Have Found It. In 2010, Marvel Illustrated produced a Comic-Book Adaptation, script by Nancy Butler, art and covers by Sonny Liew.

In 2013 it was the first novel to be adapted by The Austen Project, in which various authors were contracted to write modern day Setting Updates of Austen's six books. The author was Joanna Trollope.