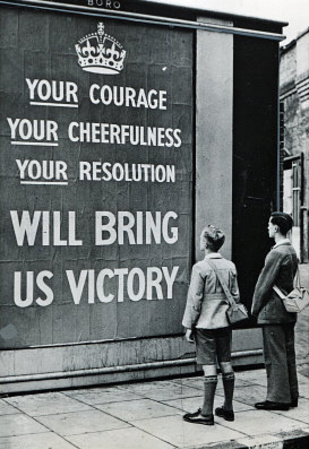 Keep Calm and Carry On.
"Hanging on in quiet desperation is the English way."
— Pink Floyd, "Time"
Advertisement:

Bullets are whistling, shells are exploding, panicked soldiers dash here and there splattered with mud and blood, the air is thick with shouted commands and the rich stench of death! And yet our hero is smoking a pipe, sipping his tea, and doing the Times Crossword Puzzle, for he is an Imperturbable Englishman.

He is like The Stoic, but an Imperturbable Englishman adds style to his stoicism by his exaggerated disregard for danger and hardship. Not only does he cope with them: he cheerily dismisses them. No matter the disaster, he always keeps his rationality and composure.

This is known as having a Stiff Upper Lip: "Keep a stiff upper lip, chaps!", "Buck up! Stiff upper lip and all that!", etc. Ironically, the term "stiff upper lip" is actually American in origin. In Britain today, the phrase is only used ironically to invoke the trope, but the concept is very real: witness the "Keep Calm and Carry On" poster, a more laconic version of the picture on this page which adorns many British office walls.

In terms of Dialogue, Understatement is key; this is why the RAF Ace Pilot is the poster child for Major Injury Underreaction. Stress is met with Dissonant Serenity, grief with Angst? What Angst?, and unbridled joy with a curt "Jolly good".

Compare Gentleman Snarker, Trying Not to Cry, This Is No Time to Panic, Quintessential British Gentleman, The Jeeves and the Japanese cultural concept of "It Can't Be Helped". This is what someone who has or pretends to have Nerves of Steel would supposedly look like from the outside. Often crosses over with Brits Love Tea, as stopping everything to make a cup of tea and consider the situation when faced by danger is both Funny, Badass, and, as seen below happens surprisingly often in real life. Not to be confused with While Rome Burns, when the response is denial instead of steely resolve.

See British Stuffiness for more negative portrayals of this British trope. Lie Back and Think of England arises when this trait gets in the way of a relationship. One of the Stock British Phrases.