Film / Carry On Up the Khyber 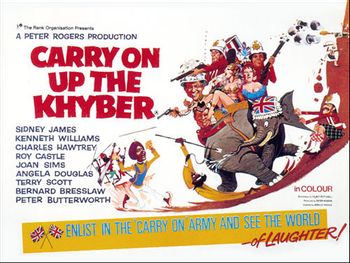 "Always ready for action."
"That will teach them to ban turbans on the buses!"
— Bungdit Din
Advertisement:

Carry On Up the Khyber is a 1968 film and the sixteenth in the British Carry On film series (often named as one of the best films out of the series) starring regulars Sid James, Kenneth Williams, Charles Hawtrey, Roy Castle, Joan Sims, Bernard Bresslaw, Peter Butterworth, Terry Scott, Angela Douglas, and Cardew Robinson.

It is set in the glory days of the British Empire, in which the governors who have set up camp in British India struggle to befriend the Kalabar citizens on the other side of the Khyber Pass. The head governor is Sir Sidney Ruff-Diamond (James), along with his men Captain Keene (Castle), Major Shorthouse (Julian Holloway) and Sergeant Major MacNutt (Scott), who are in an ongoing cold war between Rhandi Lal, the Khasi of Kalabar (Williams), who lives on the other side of the Khyber Pass: a long road around a mountainside guarded by the British army, the Third Foot & Mouth Regiment - nicknamed the "Devils in Skirts".

The British governors hope to scare the opposition into surrender by making their army wear nothing under their uniforms, but when Private James Widdle (Hawtrey) faints in front of army general Bungdit Din (Bresslaw), it is revealed he has done no such thing. This makes the governors inspect all of the army, finding the horrifying sight of them all wearing underpants. Despite hoping that the enemy will not see this, the sexually-frustrated Lady Joan Ruff-Diamond (Sims) takes a secret picture of the spectacle and takes it to the attractive Khasi, hoping to have sex with him in return.

With her disappeared, the Khasi's many wives make love to Sir Sidney as he waits for his wife to be released from her "capture". Captain Keene, Sergeant Major MacNutt and Private Widdle wear disguises as they try to reclaim Lady Joan and the photograph from the Khasi's palace, with the reluctant help of Brother Belcher (Butterworth), a missionary who "rescues" women from falling out of religion by secretly making love to them and Captain Keene's love interest, Princess Jelhi (Douglas), the Khasi's daughter.

The group retrieve Lady Joan, but time is on the line as they make their escape with help from a travelling fakir (Robinson), and Hilarity Ensues as the Brits foolishly face the natives with a Stiff Upper Lip.