A Man Is Always Eager 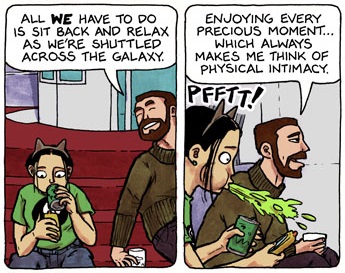 "Men always want sex. The single rule we have about sex is that we only have it with people we’re attracted to, and to be honest: that’s a loose guideline, at best... Let me assure you, if you’re a woman and you’re with a man, he’s waiting for you to say go. It doesn’t matter if he’s a handsome millionaire and you’re a mail-order bride with a hump."
— Seanbaby's Final Last Word, The Wave Magazine
Advertisement:

The idea that men are always hungry for sex and would never willingly turn it down for any reason. If a man has even the tiniest chance to get sex as a reward for performing some task, then it is always Worth It, no matter how difficult or costly the task may be, nor how disastrous the consequences. It doesn't matter if he's a virgin or if he already has sex multiple times a day, he'd forever be kicking himself for passing up a chance to do it just one more time.

To take one common example in fiction, on the rare occasion that a man is a virgin, he will always want to initiate sexual activity with his significant other. He's never nervous or apprehensive about how the first time will go, just excited about the fact that he'll actually be having sex. And he'll never, ever, be as satisfied with the state of his (non-existent) sex life as his girlfriend is.

This is a form of Double Standard related to All Men Are Perverts and All Women Are Prudes. Being a bit nervous about the whole thing is perfectly normal, and fiction will show this with both male and female characters. Usually, however, a male character will almost always be worried about how long it'll last, rather than the act itself. The flip-side of this particular trope is that, since every man is hopelessly enslaved by his overpowering libido, every woman is utterly asexual. It is outrageous for any woman to enjoy, or even want sex. If a female character does enjoy sex, she will inevitably be The Lad-ette, i.e. a woman with the personality of a man. Liking sex is just one of her "manly" traits.

There are certain situations in which this trope will always appear:

Sometimes, in a show aimed at a younger audience, sex would be inappropriate and/or can't be shown. Kissing will be used instead.

If a male character is shown not jumping at the chance to have sex with a woman, he will be either gay or Mistaken for Gay (the latter scenario can be Truth in Television). This is also common in Double Standard: Rape, Female on Male; the idea that men can't be raped by women because men are always willing to have sex, with any woman, at any time. This is also one of the reasons for the stigma against Asexuality, especially in men; since all men supposedly enjoy sex, not being interested in it "clearly" means there's something wrong with them.

One of the unfortunate results of this trope is that many people believe it in real life. Obviously, this can cause problems, with the partner convinced they've been utterly rejected if the man isn't up for it right that second, and the man thinking there's something seriously wrong with him physically or psychologically. Taken to extremes, this can lead to men being on the receiving end of emotional or sexual abuse, or even rape.

If an eager woman wants to have sex with an unwilling man (an inversion of this trope), it's All Women Are Lustful.

All Gays Are Promiscuous is this trope taken to its logical conclusion once you remove women from the equation.