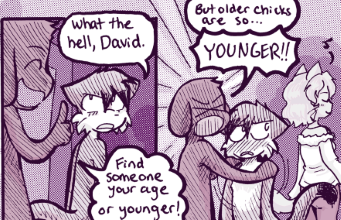 Wynne: Zevran, I am old enough to be your grandmother.
Zevran: You say that like it's a bad thing.
— Dragon Age: Origins
Advertisement:

A character who proudly and often loudly proclaims their preference for an older female romantic partner. The exact reasons can be anything from liking a more intellectual woman to simply wanting someone with a bigger cup size. This preference is most obvious in Shōnen and seinen, which otherwise tend to concentrate on women of a younger age bracket.

In comedy, this character is inevitably set up with a somewhat childish female character who doesn't feed into this taste at all, and is told so. Since a character that Likes Older Women isn't actually interested in younger women, this is sometimes used to avoid Squick.

Compare Teacher/Student Romance, May–December Romance, Mrs. Robinson, Precocious Crush, and Stacy's Mom. Contrast Really 700 Years Old. Also, please note that due to this trope being related to the Christmas Cake trope, such a person is sometimes referred to as a Cake Eater, thus explaining the dozens of references to cake on this page. Likes Older Men is this trope's Distaff Counterpart.