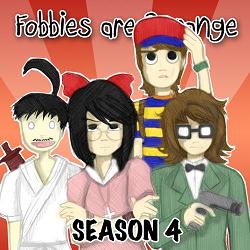 Fobbies Are Borange is an Affectionate Parody fan-retelling of EarthBound, in the form of an internet radio play. It follows the rather stupid Ness on his journey much the same as its parent work, though in a much different matter. It is written by and stars Stephen Georg (xfisjmg1), Jane Tovar (matilda_caboose, credited at the time as Martin Tovar), Jami Carignan (Katon, then credited as Benjamin Carignan), Muhammad Abdul-Rahim (Lewahi), and Chaz Estell (BlackLeader). Fobbies are Borange ran for 42 official episodes, Fobbies are Borange: The Movie, Ask a Fooby 1 and 2, and four recap episodes, ending on September 5th, 2008. Fobbies are Borange has several spinoffs, including Loids are not Christmas, Paulas are Bamazing, and Ninten Speaks. The official sequel to FaB, titled Tree From My Youth, aired its first non-joke episode on February 20th, 2009. Tree From My Youth retells Mother 3.

The Chosen Four of EarthBound have gained quite a bit of personality when transitioning into radio.

Ness (Stephen Georg) is the token main character of the Chosen Four. Ness is the supposed leader of the group, but it's pretty obvious that he's on his own journey and his friends are just along for the ride. Ness has ADD, causing him to be very erratic and oftentimes childish, but sadly, he's probably the most stable person in the group.

Paula Polestar (Jane Tovar) is angry. No one's entirely sure WHY, but she is. Since then she's gone on to become one of the most developed of the Chosen Four; her rather unconventional behavior and obvious spite for her fellow travelers being something fans either love or hate. She's dour, bitter, sarcastic, domineering, and prone to anger and violence.

Jeff Andonuts (Jami Carignan) is the third member of the Chosen Four. Jeff's personality is hard to describe, because as far as anyone can tell, he doesn't have one. The only time he shows any spark of emotion is when he's eyeing women with cake or someone is trying to pilfer his beloved EarthBound Player's Guide.

Prince Poo (Muhammad Abdul-Rahim) has big dreams and even bigger vocal chords. Poo, like Ness, is overall a childish character who shows signs of maturity every so often, only in this case it might be more due to the fact that he's from a foreign country than he's actually that spacey. Overall Poo tries to be friends with everyone (much to the dismay of Paula Polestar), and is always attempting to keep the attitude of the group a positive one.

The Narrator (Jami Carignan) is the narrator of Fobbies are Borange. He introduces most of the episodes and then wraps them up once it's over. His only known enemy is The British Narrator.

Fobbies Are Borange can be found almost in its entirety here

This series is an example of: