Fanfic / Tree From My Youth 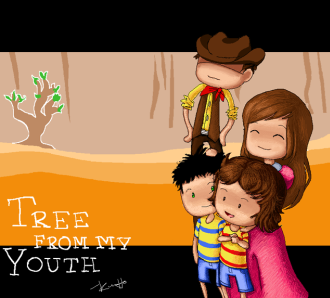 Tree From My Youth is the much-anticipated sequel to the smash hit radio plays Fobbies Are Borange and Loids Are Not Christmas. Like its predecessors, TFMY follows a game in the "Mother" trilogy, in this case Mother 3. Unlike the other plays, which were off-the-wall parodies, TFMY is a more or less straight adaptation of the original game, though it hasn't lost the creative team's humorous touch.

TFMY officially premiered on February 20th, 2009. There was a "fakisode" that played the week before, inspired by the hype created by a growing population of people who believed that TFMY was going to premiere on the 13th. Titled Tree Of My Youth, it had intentionally bad acting and a three-minute speech about the tree from Lucas's youth.

Lucas (Courtney Williams & Benjamin Carignan) is the leading role in Tree from my Youth; two voice actors were cast since Lucas is heard at two different ages. He's a crybaby and scaredy-cat, but also often the only one who realizes how weird some things are (ie, the "game tutorial").

Flint (Stephen Georg), Lucas's father and the main character of the first chapter, is an old-fashioned cowboy with a scruffy exterior and a heart of gold. He thinks a man should be dirty and smelly and that those traits attract the ladies.

Boney (Ruby Young & Edobean) is the canine companion of Flint and, later, Lucas.

Duster (Martin Tovar) is the son of Wess, a crotchety old neighbor of Flint's and retired thief. Duster is shy and retiring but has a few useful skills and helps out when he can. He helps Flint in the first chapter and becomes the main character of chapter 2.

Kumatora (Stephanie Rick) is the foul-mouthed Princess of Osohe Castle, encountered by and later joining Duster, Wess, and Rope Snake during chapter 2.

Salsa (Stephen Georg) is a monkey held captive by the nefarious Fassad, and the focus of chapter 3.

Tree From My Youth can be found in its entirety here