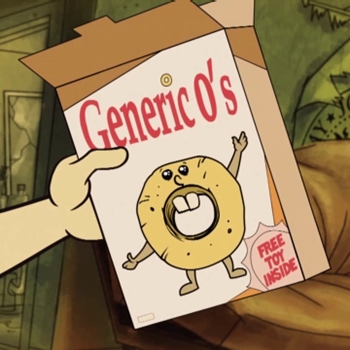 Tastes best with Plain Milk.
"Here we have a can of the world's most popular cola — no names, no lawsuits."
— Richard Hammond, Brainiac: Science Abuse
Advertisement:

When a script calls for a consumer product, and no one has offered the producers a Product Placement deal, a television program must resort to making up a brand — or, in some cases, obscuring a real brand so that it can't be identified. Another technique is to make a lookalike that doesn't show the actual brand name — for instance, a bright-red soft drink can inscribed, in white letters, "Cola", or using similar-sounding or similar-meaning words: "McDaniels", "Burger Queen", and so on.

Under Canadian broadcast regulations, product placement is considered a form of payola and is strictly forbidden. To prevent even the appearance of product placement, real brand names can't be shown on locally-produced TV shows. Dramas, comedies, and even cooking and home improvement shows have to block out the brand names of the items they use or replace them with Brand X (TV sports and news/current affairs programs are exempt, the first because the advertising can't be controlled and the second because news programs may have to report a story specifically about a product, and also because they can do whatever they damn well want). These rules don't affect imported shows, but "Canadian content" regulations limit the number of those that can be shown.

In the UK, product placement was forbidden until February 2011, but there's also the issue of "undue prominence", wherein a particular brand is, outside of any product placement agreement, given excessive exposure (Mitchell and Webb noted this in great style with the conclusion that a porn scene about a satellite TV installer would have to be a gang-bang to ensure no single brand was given undue prominence). DJs on BBC radio will add that "other brands/suppliers of [product] are available" if someone says to buy their book on Amazon or Google for information, practically as a running gag.note This, in itself, extends from the semi-frequent adverts for the formerly-BBC owned Radio Times listings magazine that were shown on the BBC's television channels; each would always bear the legend "other listings magazines are available", to make it clear that the publicly-funded BBC was not the only provider of such information.

Sometimes fictional products can become story elements in and of themselves, either as part of the "world background" of a show, or as running gags.

Films with blatant product placements, such as The Thomas Crown Affair (1999), usually have them obscured when they are syndicated.

In addition to Brand X, some movie and TV producers may choose to use discontinued products as a point of style. Quentin Tarantino is known for using boxes of discontinued cereal in his movies, such as "Fruit Brute" (Which has since been recontinued). Tommy Shelby smokes a discontinued cigarette brand in Peaky Blinders, which was popular during the timespan the show is set.

At one time this was a universal practice in advertising, allowing a marketer to compare his product to a competitor without actually naming the competitor and reminding the viewer of why he might prefer it. The competitor would often be referred to as "the leading brand", giving rise to the question, "if your product is so good, why is the other brand leading?" In the last two decades, advertising has gotten bolder, and it is more common to see a real competing product in an ad than not — or at least a minimally veiled reference to a competing product (ie, a detergent box with the basic design and color scheme of Tide, but no logo). The practice of explicitly naming the competition was arguably begun by the great McDonald's/Burger King ad wars of the late '70s and early '80s (specifically, in a Burger King commercial starring a then-four-year-old Sarah Michelle Gellar). There was also the Pepsi Challenge where Pepsi ran ads showing in blind taste tests, people preferred Pepsi over Coke.

However, in some cases it may be mandatory. For example, in Germany it used to be against the law to compare your product to a competitor's product when it was identifiable. Even now, the "laws against unfair competition" allow only verifiable objective comparisons without diminishing the competitor, legally regulated to a point where advertisers rather take a pass on comparisons than risk exposing themselves to lawsuits.

In some kinds of advertisement, items other than the one advertised that would normally be used in its own branded packaging will be found in some kind of neutral or unbranded packaging. The most common examples of this are advertisements for cereals, in which milk will be poured from clear glass jugs rather than the carton or bottle it is sold in. It is probable that this is done in order to reuse the advertisement in different countries as much as for avoiding giving exposure to those other products.

Incidentally, the notion of using fake brands that resemble the real brand (Using a pear instead of an apple, for instance) is being seen by marketers as something that improves awareness of the real brand. Amusingly, they're calling it Product Displacement.

A Super-Trope to Bland-Name Product, Acme Products (any generic corporation that seems to supply everything a character, or entire cast, uses), A.K.A.-47.

Not to be confused with the band Brand X or Russell Brand's series on FX.