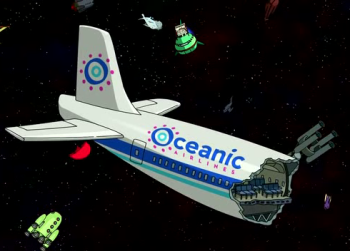 A form of Fictional Counterpart specific to airlines.

Quite often, when a story calls for a plane crash, an in-flight incident, or some other misfortune to happen to a passenger plane or airline service, Hollywood (and sometimes other media) decides to name the service Oceanic Airlines. Naturally, real airline services wouldn't want to associate with these stories, since it would imply to the audiences that their service is unreliable. Nevertheless, it's bizarre, almost uncanny, that Oceanic Airlines keeps popping up in totally unrelated stories.

Part of this is due to Prop Recycling and Stock Footage: for the film Executive Decision, a pair of Boeing 747s were painted up in the livery of a fictional airline, Oceanic Airways. The aerial shots were reused in other works (because putting a pair of planes in the air just to film one of them in flight is expensive), and the planes themselves saw use in later films. From there, a tradition was born.

The airline became most famous for its usage on the series Lost, in which the crash of Oceanic Flight 815 kicks off the plot. In this, Oceanic was given its own unique logo, livery, and various other elements to make it seem like an actual airline. A Viral Marketing campaign by the show's creators treated the airline as if it was real, creating a website with an immersive fictional backstory, TV ads, and even a phone number, all of which provided clues for fans of the show.

The same thing is done with the now real shipping company "Pacific Courier," which brought the terrorists in a truck to the Nakatomi Building in Die Hard, had one of their trucks blown up along with Bonwit Teller in Die Hard with a Vengeance, and one of their planes destroyed by the bus explosion in Speed.