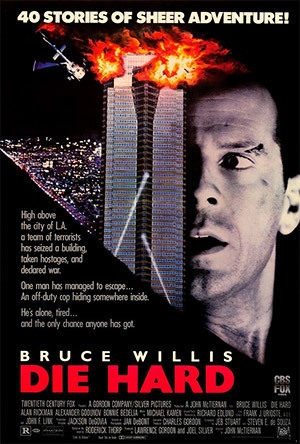 The odds are against John McClane. That's just the way he likes it.
Hans Gruber: Do you really think you have a chance against us, Mr. Cowboy?
John McClane: Yippee-ki-yay, motherfucker.
Advertisement:

The film that started the Die Hard franchise in 1988, directed by John McTiernan.

New York City police officer John McClane (Bruce Willis) has flown out to Los Angeles to meet his estranged wife, Holly (Bonnie Bedelia), in an attempt to reconcile their marriage over the Christmas holiday. He meets up with her at a Christmas Eve party in the Nakatomi Plaza, the skyscraper where she works. During the party, a group of thieves posing as terrorists led by Hans Gruber (Alan Rickman) seize control of the building and turn the partygoers into hostages — except for McClane, who manages to escape their initial assault. Armed with little more than his wits, police training, and department-issue pistol — but not his shoes — McClane does his best to alert the L.A. authorities to the attack, stay alive as he picks off the thieves as best he can, and save his wife from becoming another one of Gruber's victims.

The movie is an adaptation of Roderick Thorp's 1979 novel Nothing Lasts Forever, keeping most of the events of the book while altering the characters to various degree.note For example, McClane's counterpart, Joseph Leland, is a World War II veteran. He is much older and visiting his daughter rather than ex-wife. Gruber is a genuine terrorist rather than a thief masquerading as a terrorist. The book itself is a sequel to The Detective, which was itself adapted into a Frank Sinatra film in 1968. When Sinatra declined to return, the script was reworked into Die Hard with Willis, then mostly known as a TV star from Moonlighting, as the lead. The film grossed $138,708,852 worldwide and turned Bruce Willis (who had performed most of his own stunts) into a bankable action star overnight.

John McClane uses the radio he steals from the villains to contact the police on an emergency frequency and call for help. The dispatcher doesn't believe him, especially after confirming that there had already been a "prank" fire alarm from the same location.

Example of:
Mistaken For A Prank Call

John McClane uses the radio he steals from the villains to contact the police on an emergency frequency and call for help. The dispatcher doesn't believe him, especially after confirming that there had already been a "prank" fire alarm from the same location.