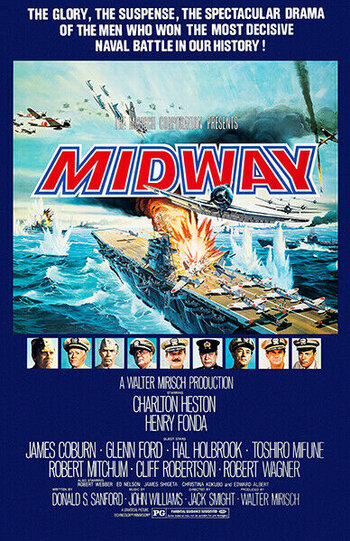 A war film from 1976 about the World War II Battle of Midway. Directed by Jack Smight and screenwritten by Donald S. Sanford, it is a grand production with such stars as Charlton Heston and Henry Fonda. It has two intertwining threads, one following the Battle itself and the other following the fictional American officer Captain Matt Garth (Heston), whose son is a fighter pilot who is at this inconvenient time engaged with Haruko Sakura, a Nisei ("second generation," an American child of Japanese immigrants) girl.

The campaign is shown from both sides' perspective and shows the Japanese as honorable and brave enemies. History is mostly followed though there are some inaccuracies notably Kamikaze's being used at Midway; while it was not unknown throughout the war for already-downed planes of both sides to attempt crash into an enemy ship in a Taking You with Me gesture, Kamikazes were never official policy even in Japan until toward the end, and they would have been fairly rare. It may be a case of being betrayed by the Stock Footage, as most of the color footage filmed in World War II was late in the War, and scenes from Leyte Gulf and the battles of Iwo Jima and Okinawa (when Kamikazes were in use) are used for this battle. This has something to do with the fact that there is zero special effects budget for this movie.