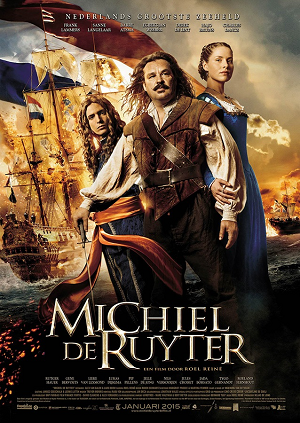 Michiel de Ruyter is a 2015 movie, about the most famous Dutch Admiral in history. The movie is set in the seventeenth century and opens with a sea battle during the First Anglo-Dutch war. Dutch Admiral Tromp dies, and the new Grand Pensionary of Holland, Johan de Witt (Barry Atsma), offers Michiel (Frank Lammers) the post of Admiral.

Reluctant to leave his family, he finally agrees when the English humiliate the Dutch fleet. De Ruyter’s strategic brilliance bring him victory and respect.

After sailing up the Medway, the Dutch fleet burns and takes several English ships, so the English King Charles II agrees to make peace.

Tensions mount in the Republic between those who want the Prince of Orange to have more power and the Republicans. This especially because fear for a French attack becomes eminent.

Charles of England secretly signs a treaty with the French, and Michiel de Ruyter will have to do his utmost to protect the Netherlands from a combined attack by France, England and two German principalities.